My debut novel was finally published in august 2013 on Høst & Søn.
The book is illustrated by Alette Bertelsen. Reviews at the bottom of the page.

Want to read the novel? – please email me at info@metteemilieannabruun.dk 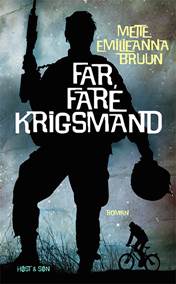 The book title is taken from a passage of an old Danish children’s song and is in Danish: Fare, fare krigsmand. A translation into English would be: Fare, Fare Soldier.

From the blurb:
Marcus’ dad is at war. Maybe he’s killing someone or maybe someone is killing him. Which is worse? Who shoots first? And does a gun really have a heart?

Fare, Fare Soldier is a story about having a father who’s deployed and the fear that he will never return.
Marcus misses his dad and must battle against his own questions, nightmares with machineguns, burning tanks and his worst enemies, Tobias, Eddie and Toke. When he meet the homeless man Skifter, who knows a lot more about war, than one would think, then he might get help to get rid of his enemies… and answers to his many questions…

The book is intended for children and young adults from age 11 and up.
It’s a realistic contemporary novel about Marcus, whose father is in the army. When he is deployed to war, it leaves Marcus and his mother in a tense and anxious situation.
Although the country to which he is deployed is not mentioned in the book, the reader would most likely assume it to be Afghanistan, Iraq or similar war zones.
Living with his mom, Marcus is trying to cope with his fear of his dad getting hurt or never returning home and an immense need for his father. Meanwhile he battles his many unanswered questions and his classmates, who are more enemies than friends.

“Fare, Fare Soldier is a fine and well written book… There are not many similar books on the same theme, and it can be a really good starting point for conversations on grief and loss, and having a deployed parent in war.
The book is highly recommended!”

“It gives an insight into how it must feel [having a deployed parent]. It gives a clear picture of what war can do to people – also to those who are not in it”.

“I cannot imagine how strong the need and fear must be in a family, where the father is deployed and it shocks you everytime the phone rings. I’ve got a lot more understanding of it.
A recommendable book!”